Some say Chicago is the pizza capital of the United States. Others believe it is New York.

There’s a third option: Manteno. Ever heard of Urban Farmer?

The 50,000-square-foot facility along Mulberry Street in Manteno’s Diversatech campus may not be known locally for its pizza-making prowess, but in the $5-billion world of frozen or refrigerated dough, sauce and cheese, it could just as well be Italy.

While unable to disclose customers and the amount of pizza and/or pizza products produced at the facility due to confidentiality agreements, the location has 50 employees and has expanded to two shifts, five days a week, meaning the plant operates 16-20 hours per day. It also plans another expansion at the 10-acre site within the next year.

And, last December, the company purchased the Peotone-based Teresa’s Pizza, a low-cost frozen pizza found in many Midwest grocery stores. The company and its vice president of innovations, Marco Rossi, has been tweaking the pie to improve its taste and appearance. It may soon be going national as a result.

“Our goal for the rest of the year?” founding partner Warren Ouwenga rhetorically asked. “Stay ahead of the demand.” 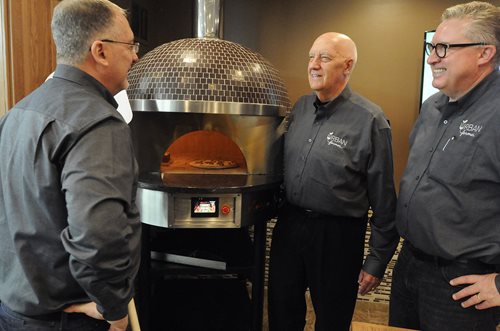 Added Ryan Sparrow, Urban Farmers managing partner: “We won’t be at the point where we will have 200 or 300 employees. But could our workforce be doubled in the coming months? Yes, it could.”

While there are many frozen pizza makers in the U.S., what sets Urban Farmer apart is what it has done with the gluten-free, non-GMO [genetically modified] and organic pizza. The company has seized that exploding market.

Sparrow said Urban Farmer is in the early discussion stage with a pizza chain in Europe. Dough kneaded in Manteno could be served in the south of France.

The growth has come rapidly, as the company was started in February 2013 by Ouwenga and Sparrow.

But pizza is king and the growing market associated with intolerance or sensitivity to the grains wheat, barley and rye are what’s making the dough — both for pizza and company revenue.

So what is gluten?

Gluten is a protein found in wheat, barley, and rye. Most of us unknowingly love it, because gluten gives our favorite foods that special touch: It makes pizza dough stretchy, gives bread its spongy texture, and is used to thicken sauces and soups.

People who cannot digest gluten have an illness known as celiac disease. It is said to affect about 3 million people, or about 1 percent of the population.

According to the National Foundation for Celiac Awareness, as many as 18 million Americans may have non-celiac gluten sensitivity.

“The customers that we make these products for you will find them in many groceries stores like Jewel, Mariano’s, Mejier, Walmart or Cosco. It might not have our name on it, but our product is there,” Sparrow said. “These products are being sold on both coasts, in Florida, in Texas. It’s all over.”

“Urban Farmer is quickly becoming known as the go-to place for new and innovative ideas,” Sparrow said. “Marco is working on a cauliflower crust.”

“There’s a huge opportunity in the healthier, better for you pizza. Not just with our own brand, but the brands we help as well,” Ouwenga said.

They operate at Manteno with little fanfare. The vast majority of Kankakee County’s population wouldn’t even know Urban Farmer is located here.

But they may have heard of Ouwenga. He was the with Heartland Harvest, a Kankakee-based food company only a few years ago before selling it to Bunge Oil.

This new company started with the idea of making frozen pizza dough balls and frozen pizza crust. One thing led to another. The company soon tapped into the marketplace for those that cannot digest wheat and other grains used for bread. Business boomed.

“This doesn’t surprise me,” Sparrow said. “I know what our capabilities are. We are a young company. … It’s about making the right contacts and getting the word out.”

Rossi knows the customer will consume their product once. If they don’t like it, there will not be another purchase. That’s why Rossi can be found in the test kitchen any time, any day of the week working on new recipes, new cooking strategies.

He also knows big companies move slowly when it comes to new strategies or product lines. He keeps tweaking the dough. People keep sampling. One day it will find its way into products near and far.

Tim Nugent, Manteno’s mayor and the executive director and president of the Economic Alliance of Kankakee County, said the most amazing thing about Urban Farmer is not its pizza crust. What amazes him is that virtually no one in the community even knows the company is here.

“This is an amazing spot. So many people think nothing is made in Kankakee County and that is not true. There are places like this across Kankakee County,” he said.

Ouwenga has a difficult time believing where he is today. How did he go from helping out his father on the last farm operating in Chicago to become a pizza baker in Manteno?

“There are opportunities here everyday. We are in a great location here. We are so close to Chicago and the transportation network,” he said.

So don’t discount Manteno’s slice of the pizza world. It may be every as large as Chicago’s slice.