According to EMSI, the scorecard is based on an index that equally weights 2013–2014 net migration, 2011–2015 skilled job growth, and three other data points — overall job growth, regional competitiveness for skilled jobs, and annual job openings per capita (which factors in replacement jobs needs). 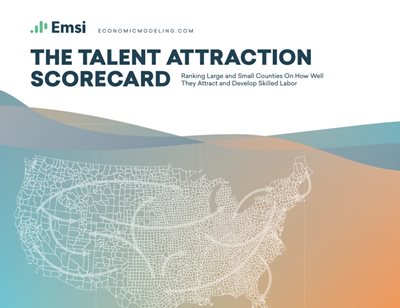 Essentially, the report shows how well every U.S. county has done drawing new residents, growing their skilled and overall workforces, and grabbing a greater share of skilled workers than other regions.

Of particular note is Kankakee County’s 2011 to 2015 skilled job growth of 8%, a result of significant investment and innovation in education, including at Kankakee Community College’s Manufacturing & Industrial Technology Center and Olivet Nazarene University’s Walker School of Engineering, as well as local business expansion totaling $1 billion in 2014 and 2015.

For this report, skilled job growth looks at a subset of occupations that require formal education and those that typically require long-term on-the-job training or least 5 years of experience.

“In economic development today, concentration on raw job creation numbers is being superceded by a focus on quality job creation and a higher standard of living,” explains Alliance President/CEO Tim Nugent. “In this effort, raising the median income level and enhancing skills are core missions of our organization and community.”

In its talent attraction analysis, EMSI found that most of the nation’s top-ranked counties have favorable cost-of-living environments. Kankakee County has historically scored below the national average in the COLI index, which is based on the after-tax cost for a professional/managerial standard of living. The Q1 2016 COLI report indicated that the Kankakee-Bradley Metropolitan Statistical Area (Kankakee County) registered a composite index of 93.3.