Restoration Works Inc. of Bradley, Illinois, a leading company in the field of restoring and remanufacturing windows and other wooden components of historic buildings, has been named winner of a 2017 Illinois Sustainability Award.

The annual awards are given by the Illinois Sustainable Technology Center, based at the University of Illinois at Champaign, to “private and public Illinois organizations who have implemented outstanding and innovative sustainable techniques or technologies, demonstrating a commitment to sustaining our environmental, social, and economic health.”
Restoration Works received recognition for its sustainable practices, including development of the Light Wave Stripper, an environmentally positive and cost-effective system for removing lead paint and other finishes while performing restoration work. 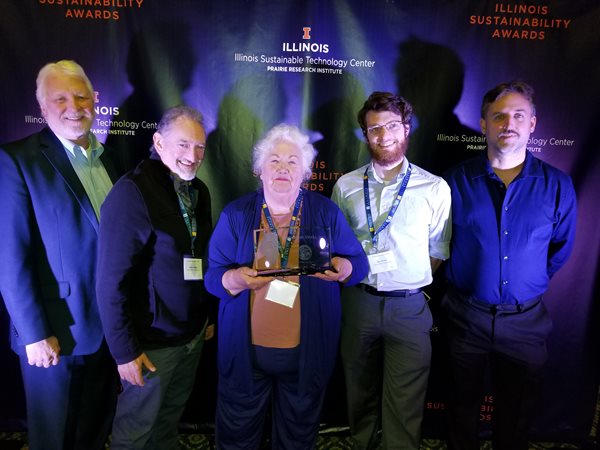 Gail Wallace, president of the company, noted , “We’ve been focused exclusively on the art and science of historic window restoration since 1982.” That focus has resulted in such major projects as the iconic 1888 Rookery Building in downtown Chicago, the Frederick Douglass Home in Washington, DC, and the Yale University Art Gallery in Hartford, CT.  At least 40 of the projects completed by the company have involved restoring 250 or more windows.

Wallace contends that the windows from older structures are far superior to modern replacements. “Those windows were made from old-growth timber, which has a tight, dense cellular structure full of natural resins, are dimensionally stable and do not easily rot,” she said. “With proper care, they are capable a long useful life, unlike modern wood windows manufactured from quick-growth tree farm wood that is less dense and rots fairly easily.”

“Unfortunately,” she continued, “we live in a society that believes it is easier and cheaper to replace such products, rather than preserving and restoring them. Over the past 60 years or so, we’ve dumped about 70 percent of our old-growth wood windows in landfills and replaced them with vinyl, aluminum, wood composite, or inferior tree-farm wood windows.”

She believes that one of the major factors affecting the “replace vs. restore” decision is the need to remove thick layers of paint (often lead-based) that have built up over the life of the window. “Stripping off the old finish from a window can be a nasty, time-consuming job that often presents environmental challenges. If chemical strippers are used, you have fumes to deal with and the need to neutralize the residue. It’s no wonder that many building owners take the easy way out and choose to replace instead of restore,” said Wallace.

After many years of study and experimentation, Wallace developed a finish removal system designed to overcome the problems associated with conventional stripping methods.

The Light Wave Stripper system employs advanced infrared light technology to quickly and thoroughly soften even thick layers of paint so that it can be scraped off cleanly. Unlike chemical strippers that require hours of penetration time to soften paint before it can be scraped, the Light Wave accomplishes the task in 60-90 seconds.

Bert Jacobson, Sustainability Consultant for the company, cites further advantages of the Light Wave Stripper, noting that there are no chemical residues to clean up or neutralize; if the paint is lead-based, the shavings must be disposed of properly. After scraping, the wood surface is clean, dry, and ready for repairs or prepping to apply a new finish. “Besides the advantage of being a ‘green’ method,” he noted, “the Light Wave Stripper is much less labor-intensive: it eliminates hours of time needed for application, penetration, and removal when using chemical stripping.”

Working with mechanical engineering consultant Ken Bowen, Gail Wallace has developed a number of models of the stripping system, from a shop-based unit with an infrared emitter nearly five feet in length to portable, a cart-mounted mobile stripping station for on-site use, to a 15-inch hand-held unit suited to use on detail work.

Commenting on the Illinois Sustainability Award, which was presented October 24 in a ceremony at Chicago’s Union League Club, Wallace said that the recognition “will help us bring this cost-effective, environmentally positive stripping system to the attention of the world. Making stripping easier, faster, and less labor-intensive will give a boost to the whole idea of reusing good quality materials instead of adding them to the landfill.”