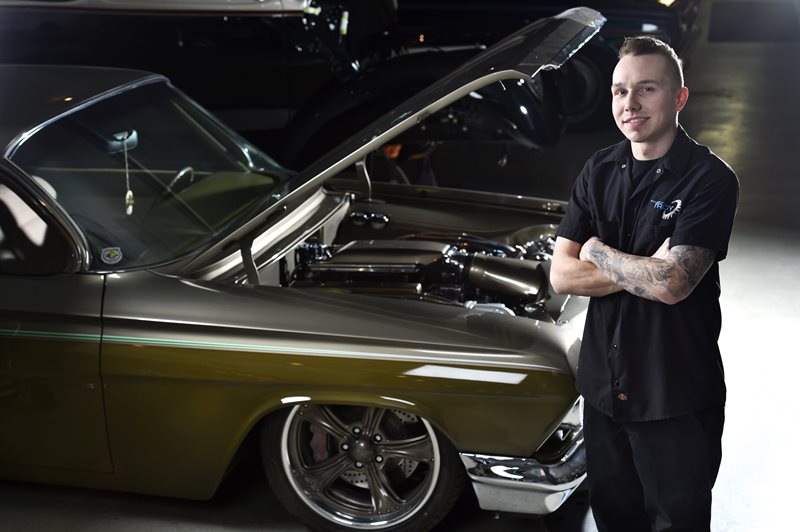 An “anything’s possible” attitude is part of Ian Walton and Casey Modert’s passion for work.

Walton and Modert work for a world-renowned auto shop, Rad Rides by Troy, Inc. in Manteno, Illinois, where they specialize in hand-crafted automobiles. Owner Troy Trepanier and the entire team say, “The only thing keeping up with your attitude is your shadow.”

Both Walton and Modert grew up in the area, and a shared interest in cars sparked their friendship. They attended Kankakee Community College to hone their automotive and welding skills. Modert completed four terms and Walton earned an Associate of Applied Science in Welding in 2010. They both continued their education at WyoTech trade school to gain additional skills.

One of Walton’s goals was to work at Rad Rides. Later—after Walton worked there—Modert’s interest in joining the crew grew when he connected with Trepanier at a car show in Las Vegas.

Today at Rad Rides, Walton focuses on welding, including chassis work and metal fabrication. He said his education at KCC provided a “platform” that helped him excel at WyoTech. “I was further ahead than most of my classmates at Wyo because of my KCC education,” he said. “KCC taught me the basics, and Wyo fine-tuned them.”

Modert originally geared his education toward automotive, then switched to welding. As a fabricator at Rad Rides, he works on welding, chassis, and final assembly, as well as interior upholstery and wiring.

But knowledge and skill only go so far in the hot rod industry. Fabrication involves artistry.

“Sometimes people don’t understand what we do, and they think of it more as a hobby when it’s 100 percent creativity,” said Modert. “We are taking old cars and making them better than when they came from the factory–they drive better, ride better, look better. We are shaping the direction the car ‘goes.’”

The pair often takes custom vehicles to places like the movie set for Fast and Furious and to Bonneville Salt Flats. At Bonneville, their cars have become land speed record holders and contenders.

One of those speedsters is the Mariani Streamliner Class C-GS, a favorite project of Walton and Modert. The “rocket on wheels” started as an idea and a pile of raw metal. Walton and Modert joined the Rad Rides team in designing and building everything from the 30-plus foot frame to the driver’s seat.

After six months of intense work, Walton and Modert traveled to the Bonneville Salt Flats to witness the car running at over 280 m.p.h. “To see something that didn’t exist six months earlier race down the track at those speeds makes you feel awesome,” Modert said.

“This project helped dial in the welding skills we gained during our time at KCC,” Walton said. “When dealing with a car capable of those speeds, safety was our number one concern. Most of the rules and standards applied to this car as far as the welding variables were taught to us by Professor Mark Stevenson.”

Stevenson, program coordinator for Welding, Machine Tool, Millwright and Fabrication, recognized the potential in Walton and Modert when they were students. “Both Ian and Casey came into KCC with great attitudes and drive,” he said.

“Professor Stevenson taught us more than welding,” said Modert. “Simple things, like ‘get your hands out of your pockets,’ helped us know how to present ourselves. He took us under his wing and shaped us to be hard workers and to do our best at all times.”

Stevenson, also a KCC graduate, has taught at KCC for 10 years, and said the first assignment in his course is to print a quote about attitude by Charles Swindoll, which includes these words:

“The longer I live, the more I realize the impact of attitude on life. … I am convinced that life is 10% what happens to me and 90% how I react to it. And so it is with you. We are in charge of our attitudes.”

“Casey and Ian both express a great work ethic,” said Annette Zimbelman, marketing/public relations manager at Rad Rides. “Credited to their education, they have shown a strong understanding of welding materials and processes. They have the ability to adapt their skill set to effectively complete projects in the shop while continuing to build upon their knowledge when working with other Rad Rides employees.”

Kankakee Community College is an accredited two-year college which awards associate degrees and certificates of completion. KCC prepares students both to transfer to four-year colleges and to enter the workforce. The college also offers continuing education courses and certification training, literacy programs, English as a Second Language and GED preparation. The KCC mission is “Enhancing quality of life through learning.” The college has a Riverfront Campus in Kankakee, South Extension Center in Watseka, North Extension Center in Bradley, and Manufacturing and Industrial Technology Center in Kankakee.