“This personal income indicator is particularly meaningful to us,” remarks Alliance President/CEO Mike Van Mill. “While our industries are thriving across the board, a central goal of the Alliance is increasing the number of middle wage jobs.”

“These wage figures, along with recent unemployment and jobs reports,” adds Alliance Board Chair Pat Martin, “tell us that, while we still have work to do, we’re on the right track in terms of providing satisfactory – often excellent – work opportunities to our residents.” 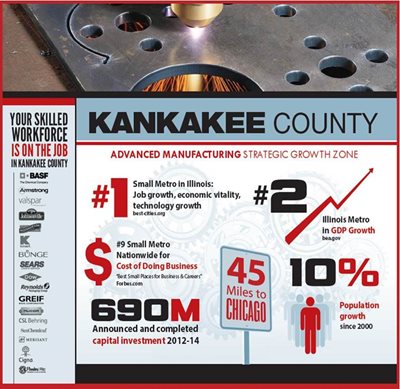 In the last 24 months, the Economic Alliance has tracked and facilitated $690 million in announced and completed capital investment in Kankakee County. The county is currently ranked ninth nationally for cost of doing business by Forbes, second in the state of Illinois for real gross domestic product (GDP) growth, and first among Illinois “small cities” for job growth, economic vitality and technology growth by Milken Institute’s Best-Performing Cities Index.

The Economic Alliance of Kankakee County is a public-private partnership that works to create jobs and expand the economic base by improving the local business climate. For more information, visit kankakeecountyed.org or phone 815.935.1177.