Outstanding high-technology growth by local companies like multinational bioscience leader CSL Behring and Riverside Healthcare has helped to place the Kankakee Metropolitan Statistical Area – which shares boundaries with Kankakee County – at the top among small metros in the state of Illinois again in 2016. Kankakee MSA’s overall ranking also jumped from 90 to 74 from 2015 to 2016 when compared against 201 small metros nationwide.


The Best-performing Cities ranking, compiled by the Milken Institute, evaluates U.S. metropolitan areas by how well they are creating and sustaining jobs and economic growth. Components include job, wage and salary, and technology
growth. 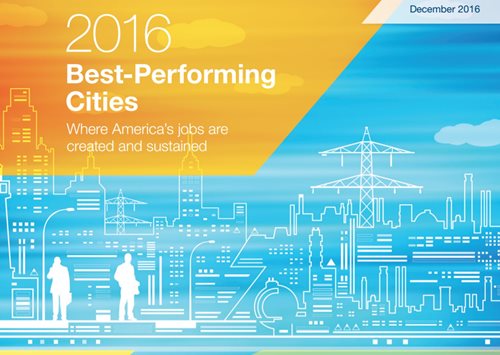 The Kankakee MSA has a history of leading Illinois small metros in this Milken index, seeing the best composite growth in 2013 and 2014 Best-performing Cities rankings as well.

“Kankakee County is in a unique and fortunate position, to be expanding and finding new avenues for growth in the technology and advanced manufacturing sectors, even as many other communities are stagnating,” explained Alliance President/CEO Tim Nugent. “Our task for 2017 and beyond continues to be laying the groundwork for these new development opportunities as well as connecting local residents and those outside of our community to these opportunities in a more seamless way.

“The Alliance and its partners expect big things in the coming year.”

Milken’s Best-performing Cities ranking reflects the individual economic indicators that the Economic Alliance has reported throughout 2016. Kankakee County’s top employers, for example, reported year-over-year job growth, outweighing 2016 industrial and commercial closures. In addition, unemployment fell from a recent high of 14 percent in 2010 to 5.8 percent in October; exports saw growth of 74 percent from 2014 to 2015, the 16th highest growth in the nation; skilled jobs grew 8 percent from 2011 to 2015; and gross domestic product experienced 15 percent growth from 2010 to 2015, from $3.3 billion to $3.9 billion.

The Economic Alliance of Kankakee County is a public-private partnership that works to create jobs and expand the economic base by improving the local business climate. Working under Kankakee County’s 2014-19 Comprehensive Economic Development Strategy (CEDS), the Alliance is challenged to help spur $500 million in new business investment and 500 new jobs, along with assisting 150 prospective new businesses. For more information, visit kankakeecountyed.org or phone 815.935.1177.