Following is the first in a series exploring how significant national economic, workforce, community development and lifestyle trends are playing out in Kankakee County, Illinois. The community is currently ranked the #1 metropolitan area in the United States by Area Development magazine for year-over-year growth in jobs, wages and output.

Jason Dole was living in a condo in Chicago working as a software engineer. After two kids, no space and a rising cost of living, Jason moved back to Manteno, Illinois. He commutes to work in Chicago’s Loop but works remotely from his home two to three times a week.

Tyson Way had been working in Chicago for more than a decade when his firm experimented with allowing employees to work from home. Three times a week, Tyson commutes with a colleague from the Riverside fitness center to the Metra station in Oak Forest. The other two days, he works at his family’s dining room table in his Bourbonnais home.

Kurt Belisle spent much of his professional career living in suburban Chicago and commuting to work downtown. He kept up the commute even after moving back to Manteno. But eventually his commute shifted to Oak Brook and then became completely work-from-home. 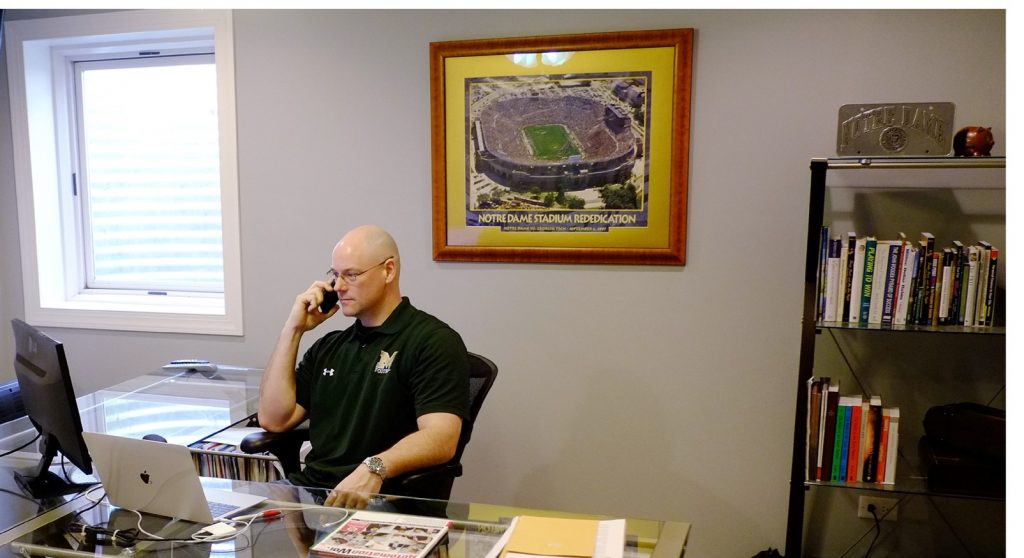 “Financially, it made sense,” says Kurt Belisle, a publishing executive, when talking about moving back to Kankakee County from Chicago. “We turned 900 square feet into 1,800 square feet with a pool and basement.”

These Kankakee County residents are part of a growing economic trend as more companies are allowing their employees to work from home. They’re called remote workers, and while they’re a game changer for businesses looking for a competitive edge, they’re also great news for places close to major cities but just far enough to still be affordable.

And Kankakee County is in a prime location.

“There’s a sense of family here,” says Jason, who lives in Manteno with his wife and four children. “We’ve been able to make some close connections. In the city, sometimes it’s hard to get people to talk to you. Here, there’s a neighborly, welcoming feeling, and it’s growing.”

According to a cost-of-living calculator created by the Economic Policy Institute, it can cost more than $95,000 a year to run a household of two adults, two children in McHenry, Lake or DuPage counties. In Kankakee County, that figure drops by about 20 percent.

The contrast is even starker in the city of Chicago. According to the real estate brokerage site Redfin, the most inexpensive single-family home in the family-friendly neighborhoods of Ravenswood and Lincoln Square is currently $499,000. That’s for three bedrooms and 1.5 bath. At half that price, you can find a 2,500-square-foot home in Manteno. 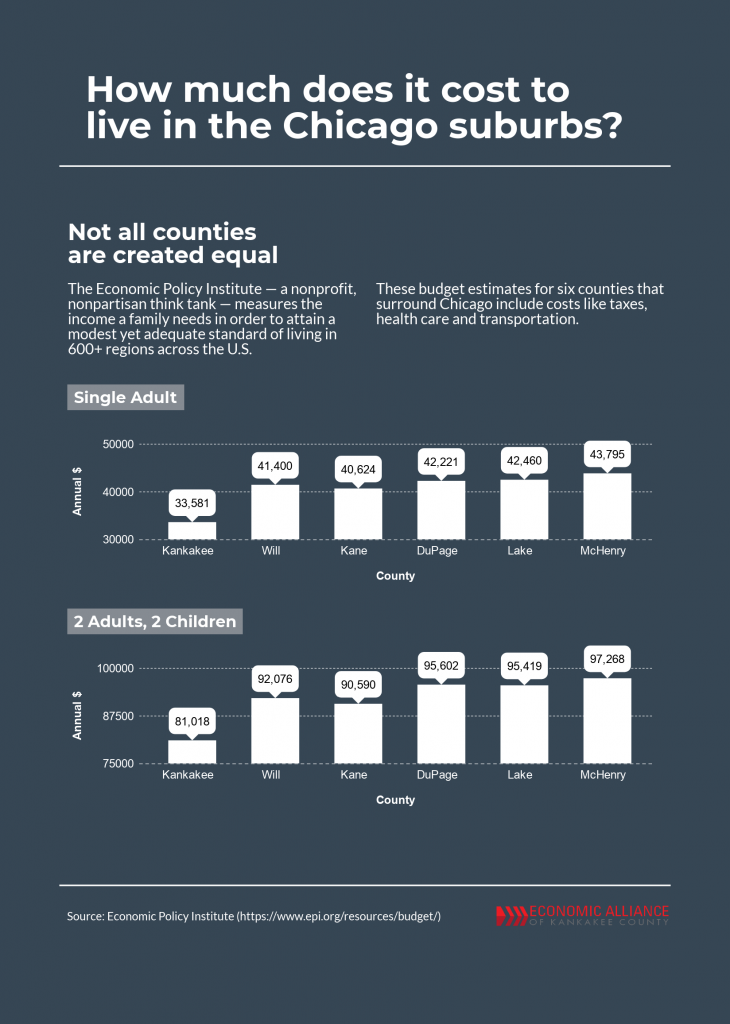 “Financially, it made sense,” says Kurt when talking about moving back to Kankakee County from Chicago. “We turned 900 square feet into 1,800 square feet with a pool and basement.”

Families are often considering education, which makes up about 55 percent of residential property tax bills. The high school in that Chicago neighborhood where a single-family home will cost you half a million dollars is rated five out of 10 on Great Schools. Manteno High School? Eight out of 10.

But there are more immediate benefits to remote work.

Tyson, who lives in Bourbonnais, says his relationship to work itself has improved.

“It helps so much with the kids,” he says. “It is so beneficial for the work-life balance.” While Tyson says he still appreciates interacting with his colleagues regularly throughout the workweek, he says, “Two, three days working from home is the perfect balance. Also, it’s a nice mental break to know on Thursday night I get three days at home.”

Located directly south of Chicago, Kankakee County has one major advantage over some of Chicago’s most-populated suburbs. Traffic patterns benefit the southbound traveler.

While Interstate 57 can be particularly trying at times throughout the day, consider that during a recent weekday at 5:00 p.m., the travel time from Chicago’s Loop into Kankakee County (a distance of about 50 miles) was just over one hour.

By comparison, to get to Arlington Heights, Naperville, Buffalo Grove, Elmhurst or Schaumburg, suburbs that are no more than 35 miles away from the Loop, commuters are spending at least one hour and 15 minutes and as long as an hour and a half.

That means that if you have to commute to an office several times a week you’re still getting home before most of your colleagues living in many of Chicago’s northern and western suburbs.

Then there’s the added benefit of the low cost of gas. Today, gas prices in Kankakee County hover around $2.50 a gallon. On average, the per-gallon price in Chicago — a reasonable city for gas prices, in general — will cost at least 20 percent more. And you can expect a 10 percent jump in most suburbs over Kankakee County.

Tyson, the Bourbonnais resident, says he probably saves more than $3,000 on gas and transportation fare alone each year.

Finally, there’s the benefit of nearby Metra stops — which all three remote workers use to get into the city — and the ease of getting to Chicago’s two main airports.

Some of the most important benefits of living in the southern suburbs are found outside of a budget spreadsheet.

Kurt has his Manteno home office insulated to block out noise, but that doesn’t mean he’s far from those closest to him. In fact, working from home allows him to spend more time with this wife, Stacey, and their two daughters, ages 10 and 7, than if he still commuted to and from the northern suburbs.

And it’s hard to put a dollar figure time with family.

“Quality time with young kids is something that you never get back,” he said. “I can get the kids off to school and still be at my desk by 8:00 a.m.”

Kurt played football at Notre Dame in the mid-1990s and is now an assistant high school coach at Bishop McNamara in Kankakee. Jason also played college football, at Merrimack College in Massachusetts, but with three daughters at home, he’s spending more time around softball and soccer fields these days.

And that opportunity to coach his daughters’ teams is not only invaluable, but also something that would perhaps be more difficult in a more densely-populated suburb. For perspective, of the nine high schools in Kankakee County, seven have a student enrollment of 700 students or fewer.

He jokes that the coaching experience hasn’t been easy, especially for someone more accustomed to blocking and tackling.

“I’ve had to watch a lot of YouTube videos to learn the nuances of softball.” 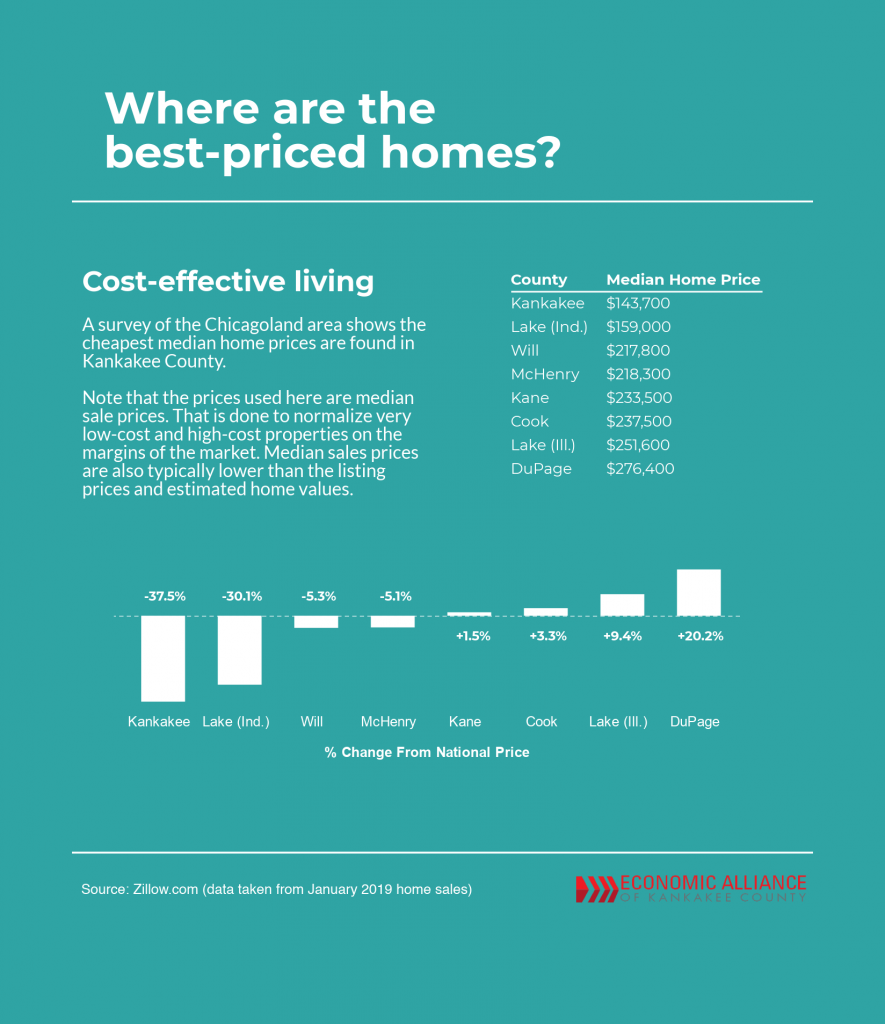 The community that Jason and his family have found extends outside youth sports. He talks about families rallying around, supporting each other. Neighbor being more than just someone who lives next door.

It feels different here. It feels like a hometown. And the way something feels isn’t always easy to quantify.

“In the city, it seemed like you needed to plan for three months and sign a contract to have a sleepover,” he said.

“Here, you have a community to help raise your kids.”